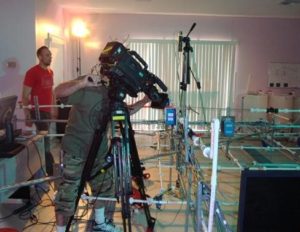 The accurate prediction of solute transport in water distribution systems has become a critical component of efforts aimed at delivering clean drinking water safely to large urban populations. One of the central assumptions that water quality models have traditionally relied upon dictates that, in a 4-way junction, two incoming flows of differing quality will mix perfectly to produce two outgoing flows of equal quality, and that such complete mixing occurs irrespective of the specific assemblage. 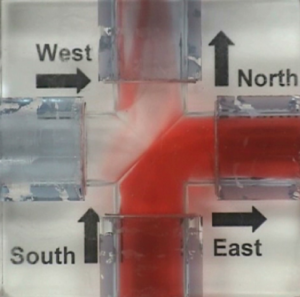 Figure 1. Flow visualization of incomplete mixing: (a) a simulation result by computational fluid dynamics (CFD) and (b) the corresponding experimental result with a high-speed camera at a cross junction.

In an effort to develop AZRED v2.0, we conducted a series of laboratory experiments and computational simulations in order to characterize solute mixing patterns at double-tee and wye junctions, both of which are commonly found in urban water distribution systems, as shown in the following figures. 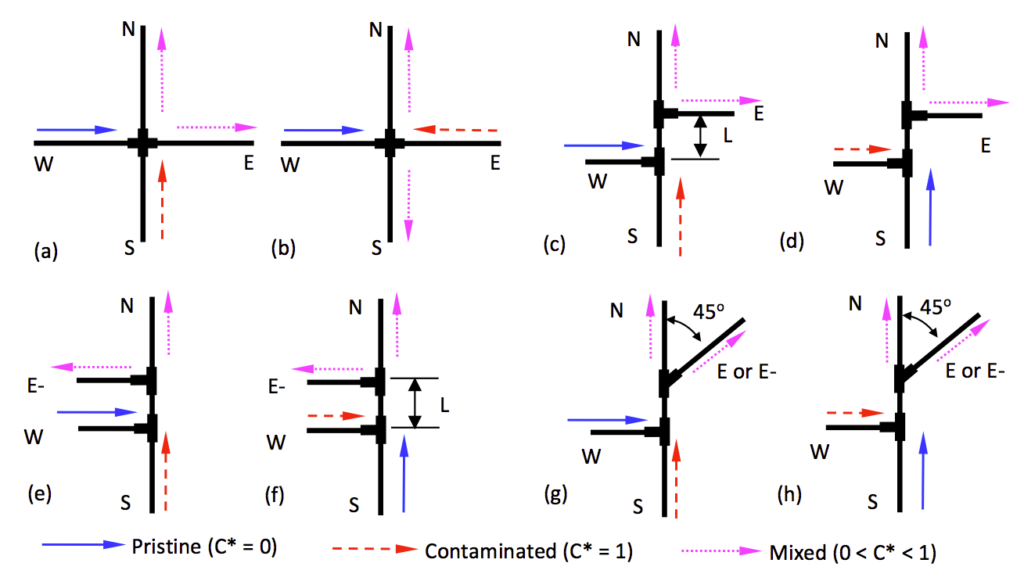 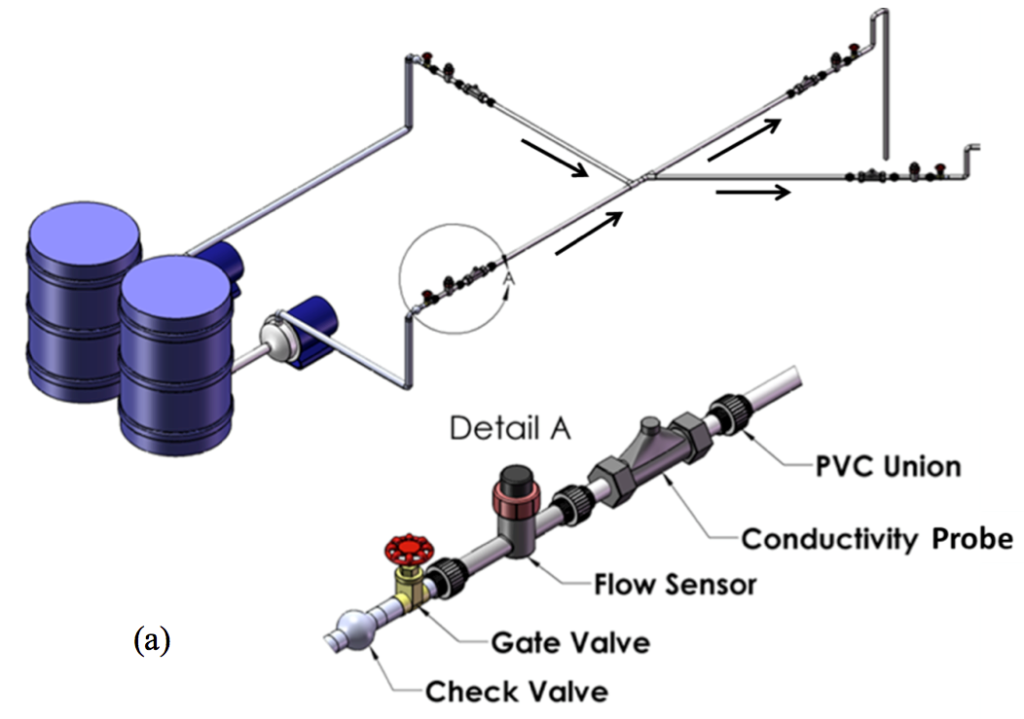 Figure 3.  (a) Schematic drawing of experimental setup for mixing at Wye junction, and various configurations, which have been tested: (b) N junction, (c) U junction (c) and (d) YN/YU junction.

This following flow chart outlines the code modifications that were incorporated into the original software tool (EPANET) to give rise to a modified version (AZRED v2.0). 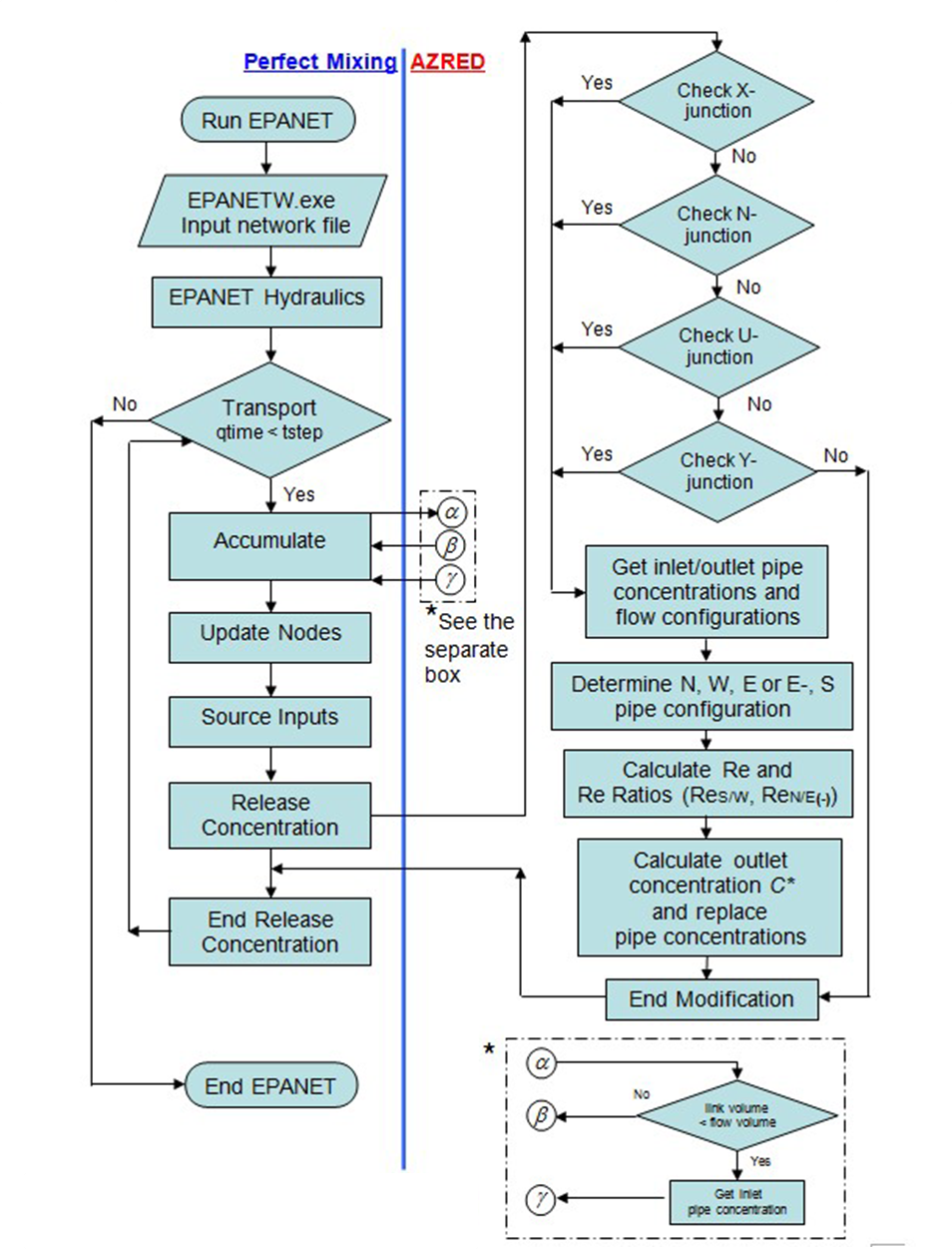 The relevance of the geometric configurations of each junction and their effect on water quality are summarized in the tutorial, and exemplary networks are then simulated using both the complete and incomplete mixing assumptions in order to illustrate the quantifiable difference in tracer concentration as a function of the mixing rate. Beyond the specific upgrade described in this study, the present effort should aid in future examinations of other hydraulic and transport phenomena that are typically modeled by EPANET or similar software tools designed to analyze piping networks.

AZRED v2.0 is an extended version of EPANET, which is the most widely used software for modeling urban water distribution systems. AZRED’s name derives from ‘AZ’, the abbreviation for Arizona (where AZRED v1.0 was originally developed at the University of Arizona, and later completed and documented at the University of Wisconsin-Madison), and ‘RED’, which is a Spanish word for network. AZRED v2.0 adds to the water quality solver of EPANET a module for calculating the effects of incomplete mixing at various types of four-way junctions, such as crosses, double-tees, and wye connectors.

AZRED v2.0 consists of two files: a main core, named ‘epanet2.dll’, which is a Microsoft Dynamic Link Library (DLL) that replaces the simulation engine of EPANET, and a graphic shell, named ‘Epanet2w.exe’, which substitutes the graphical user interface of EPANET. To install AZRED v2.0, first install a copy of EPANET, which can be downloaded from the Environmental Protection Agency website (https://www.epa.gov/water-research/epanet), and then drop the ‘epanet2.dll’ and ‘Epanet2w.exe’ to the folder where EPANET was installed (‘C:\Program Files\EPANET2\’ or ‘C:\Program Files (x86)\EPANET2\’). A message will appear asking if you want to replace these files.